It was the year 1982, that we were visiting Belur and Halebidu – the ancient temple sites of Belur Chennakeshava a Vaishnavaite temple and Halebidu Hoysaleshwara a Shaivite temple. I was marvelling at the architecture and the carvings. We didn’t have ‘Smartphones’ in those days and a camera was a little unaffordable for a person like me coming from a Middle-Class family.

For me, more than the actual temple and Garba Griha, the carvings on the outside walls were very attractive. I might have spent just about 3 – 4 minutes inside the temple, but I spent 3 – 4 hours outside marvelling at the carvings and the architecture. I was constantly wondering how those people created this kind of a marvel out of stone in those days without electricity, petrol, earth-movers etc. The construction of the Halabidu temple started in 1121 CE and the Belur temple construction was started in 1117 CE. These temples were almost built on a parallel timeline by the same Hoysala dynasty. This visit had inspired me and I later on made many more visits, enquired about and made notes about Bharathiya Shilpa especially temple construction.

As mentioned earlier, Bharathiya Shilpa was not a single topic or skill. It was distilled from the knowledge covered by a collection of several books on several different subjects and disciplines – much more than just Civil Engineering and Architecture. The body of knowledge under Shilpa Vyavastha is derived from various Shilpa Shastras written by numerous Rishis and Shilpis over thousands of years. These include books which cover a variety of subjects under Arts & Crafts, in addition to the subjects of Civil Engineering, Architecture and Structural Engineering.

Shilpa Shastras consist of two sections – the first is “Vaastu” pertaining to Civil Engineering, Architecture and Structural Engineering, which was handled usually by 5 to 6 Vishwakarma Jaathis who were also called Vasthukars and the second was “Shilpa” which contains the allied arts which are complementary to the Vasthukars and these communities were called Shilpakars who are mostly the Karigar community (Artisans). 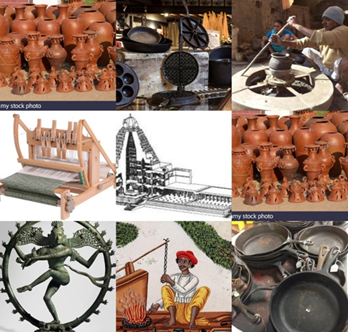 There are about 250 Shastras (Palm Leaf Manuscripts) in Sanskrit language only, which have been preserved in various parts of the country. Other than these, there are hundreds of manuscripts in local languages. If one were to account for all these there may be more than a thousand palm leaf manuscripts. They deal with either one or many of the above topics. Some of them like Manasara or Manasollasa which are in Sanskrit are a few hundreds of years old. Some of them have chapters on metallurgy, alloy making and metal casting and there are subjects like Choona/Gare and Ashtabandha Kala – which will be discussed later. One of the books, written by the great Rishi Agatsya, covers boat and ship building in detail.

These two – the Vasthukars and the Shiplakars can be compared to the modern-day Civil Engineers, Architects and the Interior Designers, furnishers. Though the jobs of these people had specific tasks attached, they would also know the whole picture. Hence, whatever these people created would blend with the bigger picture and wouldn’t stand out and seem out of place.

It is difficult to list all the scripture, but I have tried to list a cross section of them that I have heard of. Below are some of the texts on Bharathiya Shilpa which I have heard about.

Prashanth V Kumar has long been associated with Art of Living and has been one of the most important teachers of the organization. Having come in close contact with Guruji Shri Ravindra Sharma ji, Prashanth V Kumar has deeply studied various aspects from Bharatiyata perspective. Prashanth V Kumar has keen interests in temple architecture, traditional cooking, traditional arts and crafts, oral traditions of history telling (Jaati Purana), 49 Samskaras (there are 16 main Samskaras, but a total of 49), their relevance from the perspectives of local economy, Ayurveda, nature’s balance and many more. He has also been conducting workshops on these topics and has been writing about them for more than 15 years. Prashanth V Kiumar is also in the process of establishing a small Ashram under his recently formed Bharathiyata Anusandhan Kendra Trust outside Bengaluru.

We use cookies on our website to give you the most relevant experience by remembering your preferences and repeat visits. By clicking “Accept All”, you consent to the use of ALL the cookies. However, you may visit "Cookie Settings" to provide a controlled consent.
Cookie SettingsAccept All
Manage consent

This website uses cookies to improve your experience while you navigate through the website. Out of these, the cookies that are categorized as necessary are stored on your browser as they are essential for the working of basic functionalities of the website. We also use third-party cookies that help us analyze and understand how you use this website. These cookies will be stored in your browser only with your consent. You also have the option to opt-out of these cookies. But opting out of some of these cookies may affect your browsing experience.
Necessary Always Enabled
Necessary cookies are absolutely essential for the website to function properly. These cookies ensure basic functionalities and security features of the website, anonymously.
Functional
Functional cookies help to perform certain functionalities like sharing the content of the website on social media platforms, collect feedbacks, and other third-party features.
Performance
Performance cookies are used to understand and analyze the key performance indexes of the website which helps in delivering a better user experience for the visitors.
Analytics
Analytical cookies are used to understand how visitors interact with the website. These cookies help provide information on metrics the number of visitors, bounce rate, traffic source, etc.
Advertisement
Advertisement cookies are used to provide visitors with relevant ads and marketing campaigns. These cookies track visitors across websites and collect information to provide customized ads.
Others
Other uncategorized cookies are those that are being analyzed and have not been classified into a category as yet.
SAVE & ACCEPT